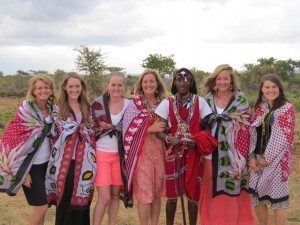 Like so many conversations I've had in Africa, I am constantly reminded of how "very rich," most of us are. There are close to 8 billion people in the world, and the bottom billion live without running water, electricity….and yes, flush toilets! That is a lot of people. It should awaken something disturbing in all of us. There are places so sad the mind goes quesy trying to understand. And yet, I have found that it is in these places, where life is never more real, more raw, and shockingly more alive than anywhere I've ever been. There is an incredible freedom and scope to Africa that you don't find in the U.S. In the U.S, almost everything is controlled, even predictable. In Africa, there's an intrigue, a fascination and a sense that you really can expand and create change. It's what I refer to often when I say that Africa is, "horribly wonderful!"

This is the view of George's house in the Dongoretti slums where I often stay overnight when transitioning from Nairobi. It's "comfortable," because he has flush toilets, electricity, and running water. Strangely however, I'm always anxious to return to our village where none of those things exist. What does exist are people who love and live in a way that is both inviting and wonderfully contagious. Whether here or in Africa, it is truly people who make a house a home!

I returned just a few days ago from Africa and like always, it takes some time to process and to try to get my head and heart in the same place. It was another visit full of daily moments that amazed and humbled me at the same time. One of our favorite things we do is deliver goats, chickens, and cows to the needy of Maasailand. Below are a few of those photos. The first beneficiary is with Mama Ian. She is a widow with 4 young children. She was left without any animals, and even having problems claiming her late husbands land benefits from the government as they often take from woman what once belonged to the men. She is forced to ask neighbors for milk, just to feed her kids tea every morning…..often their only "meal," for the day. She was so grateful and daughter Precious sure loved her chicken! Thank you to the Forsythe family from Shaffer Elementary for the donation!

The next photo is of Mama Rose and her grandmother. She is a co-wife, with a polygamist husband (not in the photo) who has a drinking problem. She is left to fend for herself and her 3 children. She also has a hilarious grandmother who lives with them. She couldn't stop laughing at my white skin and rarely let go of me during my visit. We took Rose a cow to help provide daily milk for her family. She was overcome as we walked the 7km in intense heat to bring her the cow. (Thank you to the Bergman family from Shaffer Elementary) To me it was an animal, (who didn't cooperate very well by the way in that long walk), but to her it was life. My secret grumbling was quickly put aside as I was compelled to accept gifts of jewelry and hot African Chai. I was thankful for the long walk home. It once again helped me to compose myself and just be grateful that in this country of overwhelming need, insane injustice, extreme poverty...…we helped one person smile. We helped one family live easier. I made one beautiful elderly woman with cataracts laugh?! I will never forget that sound of pure love from a family that at first was scared of my presence, and by the time we left that was replaced with a sense of hope and a reminder that people care. That is after all, why we are doing what we are doing. We give these crazy animals to needy people. What they give us is so much more……the opportunity to remember the difference a single act can make to change a life, usually our own!

In Africa there is an intense struggle between brave people who are trying to achieve change and powerful groups (the police/government) who oppose them. It's a dangerous contest between moral extremes. We can throw our hands up and be bystanders, which is often the feeling. OR we can just try our "level-best," to focus on the few lives we can actually change. I have found that sometimes narrowing the target and broadening the instrument is where we can actually see change and measure growth. It isn't the "peoples," fault that they are stuck in poor policy, landlocked between neighboring countries in crisis, and resource-scarce. They live in the slow lane, where change seems impossible. But I fiercely believe that through education a single person can change the trajectory of another person's life. "Education is not preparation for life: education IS life itself." John Dewey

The last few photos are of our kids at Ronesa doing a powerful drama called,"No More Forced marriage." These KIDS re-enacted what most of them have witnessed too many times in the Maasai community…children being given (forced) to older men in marriage. Traditionally, it's the number of cows, goats, wives and children that a man has that defines his worth. While Maasai are beautifully immersed in their culture and tradition, this is one (including FGM) that the educated Maasai are trying hard to change. It was quite a moment for me to sit there, right next to the chief himself no less, and watch with many polygamist parents in the audience the CHILDREN teaching the parents what is right and what is just WRONG! I nervously caught the chief waving his finger several times……..but was relieved when he finally leaned toward me and whispered, "Mzungu (white person)…..this is VERY good what they are saying! We want this to change about our people and this is why Ronesa is a blessing to this community." He himself has 2 wives, but I have a new respect for this traditional chief who I have since learned is the one chief who goes and rescues girls from these incidents and safely brings them to the SafeHouse (rescue center for girls) so they can continue their education and/or escape FGM. I have a new hero and his name is Chief Daniel! Asante Sana Rafiki (Thank you friend)

I will end with a photo of those very girls that have been rescued and/or bravely ran away from their families due to forced marriage and/or FGM. They are ALL of our heroes and while my heart breaks for the innocence that has been lost (and in some cases spared) ……they SO inspire all of us to continue working to help the innocent, teach and equip them with sustainable resources, and educate and empower the young to bring about positive change. This photo is the first thing you see when you step foot into the safe house and I couldn't say it any better than that! Each child, but especially these girls, are fearfully and wonderfully made!

Ashe Oleng (Thank you in Maasai) for learning about and caring for our sister school and community in Maasailand, Kenya!